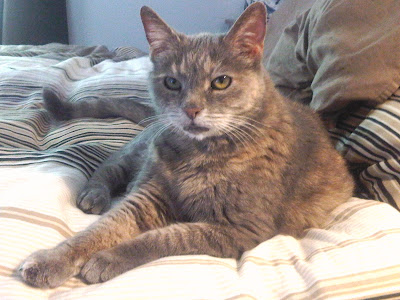 One of the things on my "to do" list for this 50th birthday year was re-learn to ride a motorcycle. Growing up, my siblings and I spent summer afternoon careening along red dirt roads through the potato fields of Prince Edward Island.  I loved motorcycling and always thought it was something I'd like to do again - though I couldn't remember the last time I'd been on a bike, even as a passenger.

With nothing else planned for this past weekend, I decided it was time to take the course, see how it felt, and (if I still wanted to by the end of the weekend) take the test to get my learner's permit.

As it turned out, despite miserably wet weather on Saturday, I had a blast. The instructors were great, my classmates were heaps of fun, and I loved being on a motorcycle again - though, I hasten to add, it wasn't easy by any means. Two days of maneuvering a 300+ pound Suzuki Marauder 250 around the training lot left my back, arms, hands and legs sore and achy. And who knew the thing that would hurt the most was my left hand?  Hours of practicing slow, tight turns requiring firm clutch control will do that apparently.

I'm too darned tired to write more tonight but, suffice it to say, I and my classmates (including three other women) all passed the test - thanks to our highly skilled and experienced instructors!  So I'm already dreaming about the bike I want to buy and hoping I can find one in time to squeeze in a few weeks of riding before winter sets in. 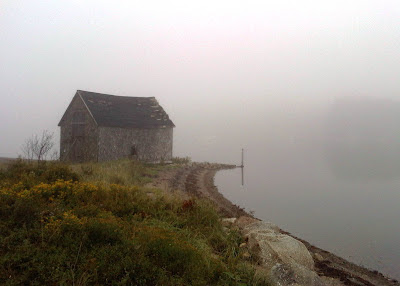 This past weekend's runs and other outings were a study in contrasts.
Click here to read more >>
Posted by Jan Brown at 5:00 PM 3 comments:

It was my first trip to Paris (that is, if you don't count the brief visit I made in 1982 when I only stayed long enough to change trains en route from Amsterdam to LeHavre where I was catching a ferry to Ireland to meet a handsome young Californian) so I wasn't sure quite what to expect when Husband and I boarded our Icelandair flight. I'd heard mixed things about the city. Most people seemed to love it, but some told stories of pickpockets, rude locals, dirty streets and outrageous prices. As it turned out, we completely fell in love with it - the food, the people, the beautiful buildings, the Seine, the art, everything!

Of course, it likely helped that we stayed with an old friend in his very comfortable apartment a short train ride from the city centre. Though just home from a month in North America and suffering jet lag himself, Marc was exceptionally hospitable and gracious and offered lots of excellent advice that helped us make the most of our time there. 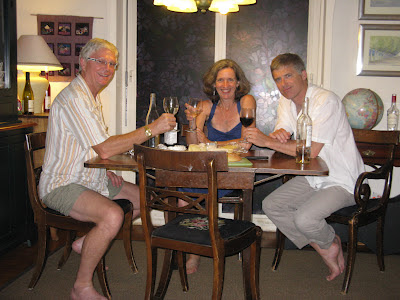 We only had four full days in the city and needed to overcome the effects of the five hour time difference, so opted to be very selective in our sightseeing and leave a lot (including the Louvre) for "next time".

Day 1
On Marc's advice, we spent our first morning walking from Montparnesse train station to the Eiffel Tower getting a sense of the city, and taking in a few sights along the way. 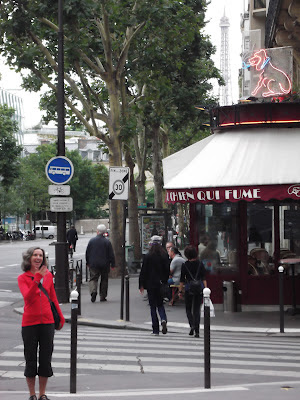 Our first stop was the Hotel des Invalides - notable for, amongst other things, being Napolean's final resting place - and its lovely gardens. 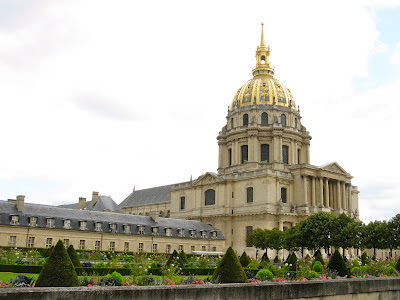 As we approached the Tower, we picked up a picnic of delicious hot sandwiches and cold drinks and ate them sitting on a park bench admiring the Tower in the distance. 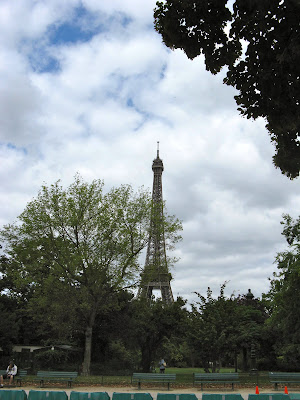 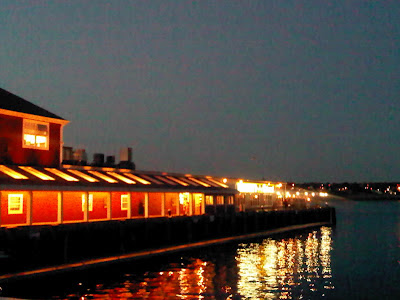 Running lessons: There are times when I should know better

It was a grim long (really long) slow run today. I probably should have known better than to attempt it. I awoke with a tight right hip and leg after too few hours of sleep and the weather was hot, humid and unsettled. To make matters worse, my knee is continuing to act up after its encounter with a rock a few months ago. Nonetheless, I changed into my running clothes and headed for Shubie Park intent on covering 18-20k. In the end, I settled for 15. Fifteen long, sweaty kilometres of dragging my sorry butt up and down hills. It wasn't pretty.

To make matters worse, it wasn't even a good day for taking photographs. The winds were so strong, it was hard to get a clear shot of anything.

But did I have the good sense to stay home and give my poor body a break? Of course not. By 50 years old, you'd think I'd have learned a thing or two but I guess not.

The trouble was I was tense and wound up after awakening at 4:00 in a cold sweat. You see, my laptop crashed yesterday afternoon. "Irritating", I thought at first, "but not a major disaster." After all, I hadn't used it for much besides surfing the internet the past couple of years.

Until 4:00 am, that is, when I awoke with the sickening realization that all my Garmin training files were on that laptop and I hadn't backed them up. To be clear, those files were my only record of where, when, and how fast I'd run for the past three and a half years.

I know. Dumb, eh? Why would any sensible grown-up woman store her only training records on a 5 year old laptop without making a backup. Good question.

To be fair, my laptop had always been completely reliable. Sure, it cranked more and more slowly over the years, but it always got where it needed to go - eventually.

I'm still hoping I'll be able to use a hard drive enclosure to recover the data (don't I sound techie?) but  I've no idea if it will work and it may take a week or more to get the enclosure I need. In the meantime, I'll be worrying and wondering why I sometimes do such really stupid things when I should know better.

Like forgetting to make a backup copy of all my training records.

Or going for a long run when what my body needs most is to rest.

Fortunately, the day turned out better than it started. When I finally stumbled back to the house, Husband was waiting with news that my brother and his boys were dropping by for a visit. Sweet! And, after hearing my tale of woe, he took pity on me and offered to make a toasted tomato sandwich that I could eat in the bath.  Double sweet!  Fed, watered and soaked, I even had time for a quick nap before the boys arrived. Good thing since the two littlest ones are astonishingly energetic!

The youngest impressed the heck out of us with his Spidey impersonation. 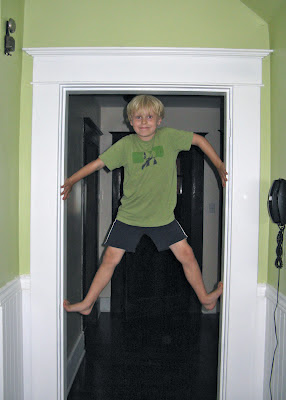 While his big brother showed off his extensive climbing and acrobatic skills. 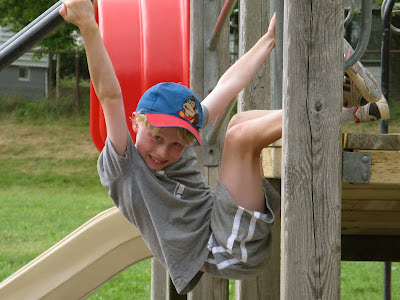 After letting the boys burn off a little energy at a local playground, we wandered over to visit the ducks and geese at Sullivan's Pond, became acquainted with a neighbour's pet rabbit, hunted for horse chestnuts, and ate ice-cream before they headed home. In short, it was a perfect afternoon.

Now, time to quit feeling sorry for myself and tackle a few chores. There's nothing I can do about my laptop tonight and other projects await - like writing posts about our European adventures, for instance. I promise I'll get to them soon. In the meantime, here's one of my favourite shots from Paris. 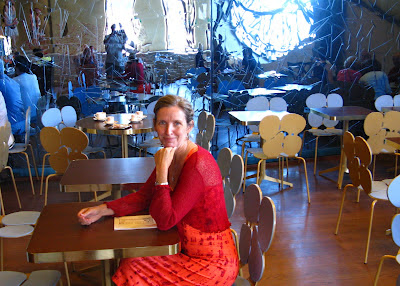 Extra points if you know where it was taken! :-) It was another wonderful weekend at Risser's Beach - with sunny, warm days followed by beautiful sunsets and cool, clear nights.  I took this shot while the guys were cooking supper. My niece asked me to take a photo of her "rock climbing" while I was at it. 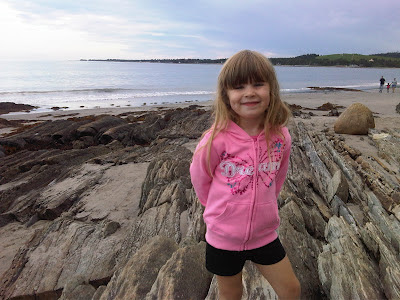 When I asked her what colour the clouds were, she replied "Purple, pink, blue, grey and white." Clever girl. 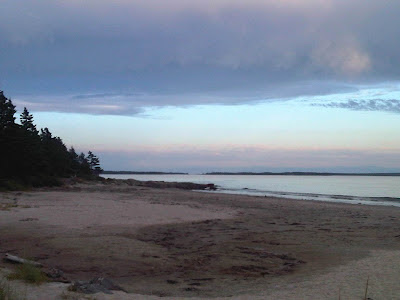 I think seeing the world through the eyes of a 5 year old is good for the artistic soul.
Posted by Jan Brown at 8:58 AM 4 comments:

Email ThisBlogThis!Share to TwitterShare to FacebookShare to Pinterest
Labels: Being a writer/artist, Enjoying the moment, Favourite places, Perspectives, Sky paintings 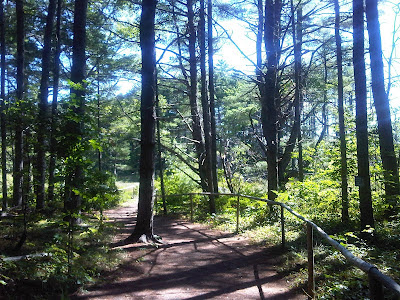 It's been a month since my last post - longer than expected but it couldn't be helped. Life has been full, full, FULL of new places (Paris, Portsmouth, and Enkhuizen) and experiences (my first Bruce Springsteen concert!), time with friends and family, love, laughter and friendship.

I hope to find time to write about all my European adventures in the coming weeks but today I just want to say how good it felt to run familiar trails after being away so long. This morning I did a total of 17 kms beside the LaHave River and through Peace Park, where I stopped briefly to enjoy the quiet solitude before turning towards home. Though it was a sunny warm day, fresh breezes reminded me that autumn is right around the corner. 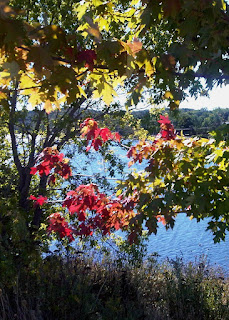 En route to the park, I was struck by how different everything looked since my last visit six or seven weeks ago when trees and lawns were lush and green, gardens were in full bloom, and the air was heavy with humidity. Today - after a long hot, dry spell - lawns and gardens were yellow and faded, a few leaves had begun to change colour (already!) and the air was cool, crisp and clear. It made me realize how much of our beautiful Nova Scotia summer I've missed!

Fortunately, the weather is glorious again this weekend - which is why blogging about our European adventures will have to wait a little longer. Husband and I are off to the beach to savour these last few days of summer.

Happy Labour Day weekend, everybody!
Posted by Jan Brown at 4:25 PM No comments: 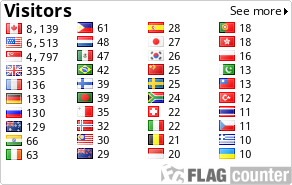